Magnus Walker is the Urban Outlaw. The tattooed, bearded rebel describes himself as a goal-orientated Porsche collector, builder and racer. Magnus also believes that; fundamentally, all car enthusiasts share the same passion, the passion to get out and drive.

And when you’re passionate about the drive, there is only Mobil 1.

Using his rock music background, Magnus became a noted fashion designer – selling his self-designed punk clothing in Venice Beach. Soon after, he stepped up to supplying the likes of Disney, Universal Studios and Six Flags Magic Mountain. This was followed by a real estate business venture with his wife, Karen. Along the way, the Los Angles loft the couple renovated as their home, eventually morphed into a semi-permanent and highly-profitable film studio. The success of these businesses enabled Magnus to indulge in his other passion – Porsches.

Rather than pristine, concourse machines, Magnus prefers the scars and road rash that’s an inevitable consequence of getting a car out and driving – spiritedly on the road, as well as the track!

“Cars need to be driven,” insists Magnus, “and that can leave a mark or two.”

Urban Outlaw cars wear these tell-tales like a badge of honour.

Mobil 1 is key to the Magnus mindset, “the great thing about Mobil 1 is that it allows me to get in and go anytime, anyplace, anywhere.”

Magnus also acknowledges, “Porsche is a brand built on loyalty.”

Mobil 1 was built on the same philosophy. This shared approach to all things automotive is why both Porsche and Magnus are Mobil 1 brand ambassadors.

Given this relationship, Mobil 1/Porsche Racing invited Magnus to be a guest at a number of 2017 WEC rounds – where he became Mobil 1 and Porsche ’s lucky charm. He attended Le Mans for the first time – and Porsche won. He attended Mexico City, where Porsche scored a dominant one-two victory. Magnus was also at Austin Texas – for yet another Porsche one-two win for their 919 Hybrids. This was Porsche’s third one-two in a row, as they’d previously taken out the 6-Hours of Nürburgring. All of which helped Porsche secure the 2017 World Endurance Championship.

Having owned over forty 911s, plus many other of Zuffenhausen’s finest, it’s fair to say Magnus loves his Porsches. He also loves driving them as Porsche intended, which is why this world-renowned Porsche icon uses Mobil 1. 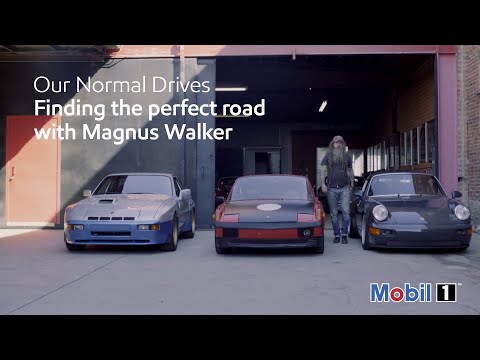